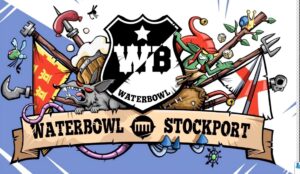 Once again, we’ll be hosted by the North West Gaming Centre in Stockport. The event takes place on February 18/19 2023.

Entry to the tournament remains £20 for NAF members and £25 for non-NAF (this price includes NAF membership).

Payment is by paypal (Go to www.paypal.com and pay your entry fee into the account: waterbowl@hotmail.co.uk  (please use the Friends and Family option) or cash (If you wish to pay by cash/transfer, then email waterbowlbb@gmail.com and let me know)

For some ideas on where to stay or how to reach us there is more information here.

What do I Need To Bring?

Rosters must be submitted to waterbowlbb@gmail.com by the end of Wednesday February 15th 2023 for checking ahead of the tournament.

0-1 Star Players may be taken by coaches of Stunty teams.

There will be clocks on the screens so that you can see how much time you have left in the round. There will also be regular time announcements. Please download a chess timer onto your phone in case you need it, there will also be some chess clocks at the event.

Results will be submitted using Whatsapp.

All teams must be rookie teams with a starting value of 1.15 million gold pieces. Remember that the 1 x free Designated Fan does not apply to tournaments – some online roster builders instantly add this when you create your team.

You may use any of the races officially sanctioned by the NAF at the time of the tournament. All models must be fully painted but can be from any manufacturer.

Before the start of the tournament you should select one of the following Upgrade sets:

Necromancers can resurrect a single killed opponent to use as a zombie who will play for the team for that game only. After the game, the team loses any bonus player gained during the game. The same applies to Plague Ridden and Nurgle teams.

Points are awarded for:

Tie-breakers: The first tie-breaker will be Strength of Schedule, followed by TDs+Cas (total), then TDs+Cas (net) followed by a dice off.

Only Casualties generated by blocking count i.e. those that would normally generate SPPs (no fouls, crowd surfs etc).

No unpainted teams please. Models must also be clearly recognisable as the positions that they represent.

All players must allow their opponents to share their dice if requested to do so.