As well as the welter of tabletop blood bowl, lots of WB coaches also play online.

If you play on Fumbbl, you can come and join Das Waterbowl. If you have little blood bowl experience you may wish to join the 145 Club, which is a league aimed at supporting new players. 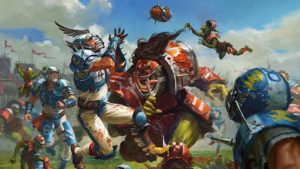 Blood Bowl 2 is a favourite of many of our coaches, and you will often find RickWreckless, Kfoged, Douglowe, or CJBlackburn playing on there.

Kfoged runs a league on BB2 featuring some of Europe’s best coaches if you fancy testing your mettle. It’s called TackleZone Star Divisions Keep your eyes peeled for openings.

https://www.twitch.tv/kfoged   – Kare is one of the best players on the tabletop scene, and there’s plenty to learn from watching his streams.

https://www.twitch.tv/rickwreckless   – As well as being a lovely human, Rick is one of the most entertaining streamers on Twitch, and is a very popular watch.

Some other twitch users we recommend:

https://www.twitch.tv/jboneds –  Johnny plays Blood Bowl, painting, retrogames and more. Anything to avoid putting out a podcast.